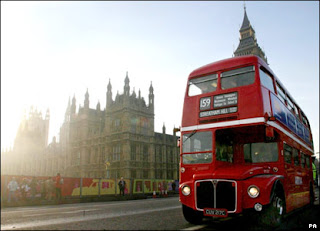 I am going through a self- imposed thrifty stage for various reasons, but there is much to enjoy in London that is fun and free- or virtually free. So I thought I would share one of my favourite frugal ways of de- stressing in London... taking a ride on the bus.

This pleasure is sweetest when you are at the front of the top deck, preferably on a route master but this is only possible on certain routes these days. The double decker bus is the only real choice for a leisurely, pleasure seeking bus ride because the views from the top deck cannot be captured from anywhere else in the city. The height is just right to appreciate the architecture and to be able to see what's going on at street level and above.

Depending on the number bus you take you can pass through various London neighbourhoods or villages and enjoy watching totally different kinds of people, hearing widely varied sounds (outside the bus and inside on people's headphones), seeing all kinds of architecture and also lovely parks, trees and the river . You might see a fantastic shop you didn't know was there- or spy somewhere you'd always heard about but could never locate. Any bus that goes past Hyde Park or over Waterloo Bridge is particularly recommended- the park and the view of the river from bus height are just perfect.


If you are actually setting out to take a leisure ride, or you've hard a long day and fancy making the journey a bit more glamourous, I recommend treating yourself to a favourite bite. My preferred options are rose and violet creams from Charbonnel and Walker or the gorgeous Hope and Glory or rose flavoured macaroons from Laduree. But these are both very lux- I'm sure a Cadbury's double decker would also be apt and delicious.
Posted by Rose at 17:48 1 comment: 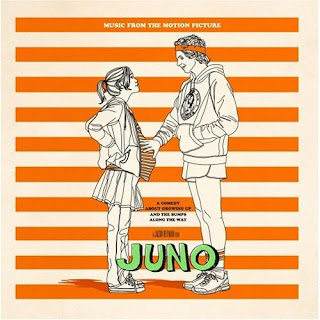 I went to see the $100 million grossing indie flick Juno this week. I think the film is wonderful, it feels very real and honest to me and I think it deserves the attention it's getting. Although it's probably showing at thousands of multiplexes across the world it has a very precious quality of feeling intimate and personal, like a minor film you happened upon and only you and people like you would take into their world.

You can of course go and see Juno yourself, or not see it, that's your choice and I don't believe in going into plot details in a forum like this. Whether you go or not I definitely recommend looking up the soundtrack; it's very sweet and endearing and matches the tone of the film very well. It's maybe a little consciously cool but what's so wrong with that?

The main reason I wanted to write about my cinema outing is to relay something beautiful and touching I saw inside the theatre while watching the film- but not on the screen.

I try to get to the cinema as early as possible because I find everything is better on the big screen from the trailers to the Lynx adverts- and I also like to bed my seat in and get comfortable. While the pre- showing music was still playing a couple in their mid- forties came in and sat in front of us. The lady was quite held in and old- fashioned but she was not quite stereotypical enough to be prim. She was well turned out in a department store dressing sort of way and seemed confident but reserved. Her husband sat and immediately sprawled across two seats with one leg over the other but sitting very high in the way legs do when fat is between them. He had the typical monk style hair do some older men get of a shiny bald patch with a doughnut ring of fluffy grey- white hair. Although the hair was wild and nutty professor- esque his clothes were very proper- a shirt, v- neck jumper, chinos and brown lace ups, the kind men have that make a clicking sound when they walk.

The old man seemed pompous and kept making loud, irritating comments during the trailers; he exclaimed about how crap everything looked and patted his head in disbelief after one particularly uninspiring trailer (to be fair they weren't the best but this was Sunday afternoon in a respectable cinema and I wasn't expecting heckling from the middle- aged portion of the crowd). The nutty professor piped down for the film except for occasional chortles and I thought no more of him, or his wife except that the film was perhaps an odd choice for them but I was glad they were keeping quiet.

However towards the end of the film he took me by surprise. As Juno is clearly quite pregnant in the posters for this film I don't think I'm spoiling anything by saying there is a birth scene near the end of the film. The labour is well presented I would say, I have never seen the real thing but I have watched lots on film and television and this was in the not too unrealistic category and it was quite poignant. While the audience seemed engrossed in the film I wasn't expecting to hear a loud bawling sob from anywhere in the theatre as Juno's baby arrived in the world, let alone to hear it from the row in front of me! But as my ears pricked up I realised that the nutty professor had his round glasses off and was openly sobbing into his handkerchief. I am not totally sure why but I was very touched by this at once quite proper and rather uncouth man showing his emotions so openly when he seemed so stereotypically reserved. I was also very glad and somehow uplifted that the film and he had connected so well when they seem to have so little in common.

By the time the credits were rolling and the lights were coming up the Professor had regained composure and was barking about needing to get to the car to his wife but under the cover of darkness he had revealed himself. As I watched him and his wife march out of the cinema, he talking loudly and she following dutifully, I just smiled. I enjoyed Juno very much and I would imagine if he could connect with the film so well then everyone probably can.
Posted by Rose at 16:49 No comments: