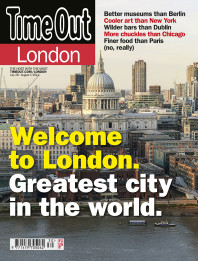 Today is the first day of the Olympics and I'm so excited. London is full of visitors and it feels like a really happy time, a mixture of Christmas, the Jubilee and a really special birthday.

I don't pretend to love all the sports but I love the idea of the Olympics and I hope London executes the Games in the spirit it should have- less official sponsors and more amazing stories like this.

I wasn't thrilled to not get the tickets I'd hoped for and I did feel uninvited in many ways by that process but I live literally round the corner and the site of the stadium all lit up like a beacon from my balcony every night makes me really happy. East London has been through some really tough times but is a place with great history and spirit and I think if the Games were going to be in London the East is great place for the heart of everything to be- that stadium has risen literally like a phoenix from the ashes of bomb damage, economic difficulty and real poverty, the type that we sometimes like not to notice but that is very real in some parts of London.

Stratford is already transformed by being a destination to visit, rather than a place to go through- and it feels like a really happy, upcoming place now.

I can't wait for the opening ceremony! Welcome to everyone!

Picture from Time Out London

A Doll's House at the Young Vic

On Monday night I went to see  A Doll's House at the Young Vic and I really can't recommend it enough.

The play was of course written and set in late 1800s but it really is very modern, even now, I know people say that and you probably see the Victorian costumes and think oh yeah I bet it isn't- but this is! Torvald is a banker, Krogstad is a clerk- both are legally trained, Dr. Rank is a doctor, everyone (male) is a professional. The play constantly discusses financial hard times, the struggle to maintain a certain lifestyle- and it discusses in this case a women's dependence on men- though Ibsen was very clear he didn't mean to write a feminist play, he meant to write a play about people having their own identity, male or female- but the play was considered shocking at the time because that individual was a woman- and it resonates today because it's a woman I think- though maybe someone will do a production where Nora is the breadwinner and Torvald the house husband- it would work just as well if it were done well, I think.

The post below about marrying for money loomed large in my mind while watching the play. I've had the discussion recently with friends, partly because of what I wrote below, about thoughts on marrying for money- no one explicitly said they would but everyone said it would be great- and some said they really have thought about it seriously- or are thinking about it seriously.

Nora and Christine don't marry for money because they have a choice though, they marry at a time when they were either their Father or husband's responsibility and if anything happened to either and you as a daughter or wife weren't provided for you were seriously stuck. Christine works as she's a widow- and she says she loves to work and it gave her her identity, Nora does some work but she has to hide it from her husband because he would be angry- and perhaps ashamed.

The play is very sad- very sad for everyone- but Nora's situation is particularly difficult.You begin the play thinking she is ridiculous, acting like a little girl and begging for treats like a child would beg for a doll- but you realise she has to be this way to get anything in life, it is the only way for her. You also realise she has courage and she has morals, they are different morals to the norms of her society though. She considers her families well being above their respectability, which is standard now but it's clear it wasn't necessarily then.

A Doll's House is a great play but it is dependent on a good Nora and Hattie Morahan is a great one in my opinion- sickly sweet when she needs to be but gravely serious and very real when the play requires. Importantly you are with her, even at the play's conclusion, which is controversial even now. As the lights dimmed I thought good luck to her Nora, good luck to all the Noras. 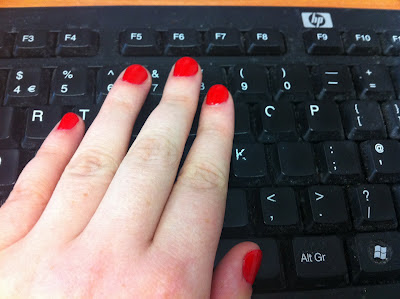 I have formed something of an addiction to Shellac- the semi permanent nail varnishing technique that I used to be a bit snobby about.

It turns out that it makes your nails look amazing and it's very addictive having unchipped, bright red nails to look down at for at least a week before there is even a sign of trouble.

I must say that although they say the varnish lasts 2 weeks I would say a week is the optimum time for it looking truly film star well groomed. However you can eek out another week if you're careful and don't mind the regrowth showing a little at the top of the nail. I also have quite fast growing nails and I've noticed not everyone does.

I have paid so much money for manicures that can't last more than 2 days on me because I type all day everyday- for work in the week and for my hobby at the weekend. I also don't have a cleaner and things like unblocking the sink earlier (I know, I was horrified too... chick peas it turns out do not go down sinks) just ruin anything but this industrial dried on space age varnish.

On the downside once the shallac starts lifting I do have a tendency to be bad and pull it off which is really bad for you nails and they tell you not to do- but if you don't do that like me you shouldn't have any trouble- and you can finally have film star, do anything and they don't chip, nails!

What's not to love?

Men who marry women for money 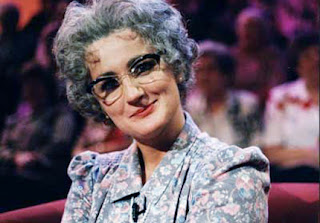 Mrs Merton famously asked Debbie McGee why she married the millionaire Paul Daniels- and it was funny-  but ladies how do we feel about men who marry women for money?

This sparked a discussion amongst a group of professionals I was with recently. While we've all been grafting a former peer has bagged himself a billionaire's daughter and can hang up his suit and tie forever- and get the tux out for charity dinners.

My thoughts aren't about individuals though. Enjoying drinks, rather too many drinks, with single girlfriends this week the discussion turned to men- as it often does. A friend had been advised to write a list of must haves and must not haves in order to focus on finding a long term partner- rather than lots of short term fun. The life coach/ guru type she's seeing said that the lists help you focus on what you actually want from a relationship- and actually once we started writing them down it does sharpen the mind.

It's very interesting to see what is actually important for different people. All of ladies present said that any man had to be financially independent, that at the outset we would not want to be financially supporting a man, though of course you never know how life will turn out and in a marriage I'm sure we all understand that might become necessary.

But this post is about men. If we asked a group of men to write a list would they now write a woman who is financially independent, probably, I don't think they would have in years gone by. I also think men probably mean able to look after herself for now financially at the moment, not forever.Whereas I think the women mean a man whose finances you'll never have to worry about, whose finances will hopefully worry about you. There is a difference.I pass no judgement on any of this by the way, I am neither endorsing nor cristicising.

There have always been wealthy heiresses, the Countess in Downton Abbey was fortune hunted from America to save the grand but cash poor estate- and though the story is fiction the fact that rich heiresses have always been sought isn't new. From Elizabeth I to Christina Onassis a woman of means must be mindful of suitors looking for money more than love.

Nowadays though there are also more women who have made their own money and there will be more men who earn less than their wives. There will also be more men thinking I'm a good looking chap, and I might get ahead better ahead in life meeting a nice girl with money than working 14 hours a day at the coal face? So perhaps good luck to those men- they aren't doing anything that hasn't been done for years, more by women but by both seces- and I am not rich enough to have to worry about it, but I do find it strange- and I find thinking about money when thinking about love strange- but I'm an old romantic. 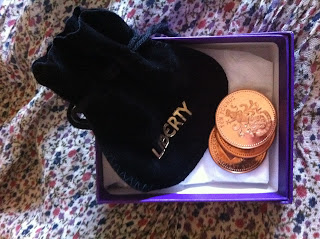 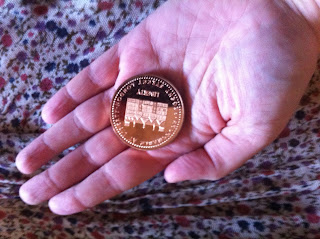 While the news is full of the Euro the only coins I'm really interested in are these beautiful Liberty of London copper treasures.

They come in a pouch that looks a bit like something Maid Marian might have carried to give funds to Robin Hood and have a charming little picture of the best department store in the world (in my humble opinion) on them.

Clearly these are the best form of gift promise you can buy a lady, or gentleman. They make those plastic cards you get in other shops look a little bit silly don't they?
Posted by Rose at 09:31 3 comments: 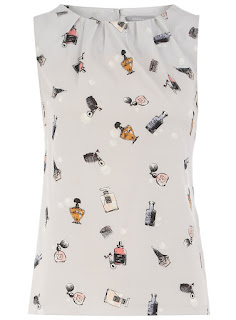 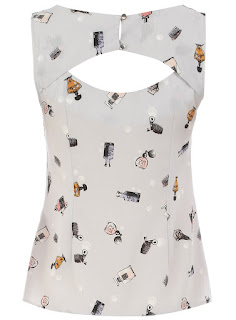