I have a friend who is going to become an expat in March- leaving us in London behind for a sunnier climate and hopefully a sunshine filled work and private life.

She recently posted on the social network that I wish I wasn't on but still am (!) about what would everyone do if they only had one month left in London. That really got me thinking- leaving London wouldn't be for me anyway- but if I was for whatever reason what would my goodbye things be- and what are the things I've always meant to be but still not managed to in ten years of calling London home.

Well the things I said were a must if you were leaving, however many times you've done them, were Borough Market, Columbia Road market, walking the Southbank from Wesminster to Shad Thames (and stopping all the way for South bank food, for the Globe, Tate Modern, St Paul's, Borough again of course and up into the city past the Tower, Tower Bridge and beyond. I also thought at least one more theatre visit would have to be made and at least one more long park walk followed by a roast if it was Winter or at least one more picnic in the Summer- Kensington Gardens or London Fields are my favourites for different reasons.

The things I haven't yet done, well that's more interesting-I've never been inside the Houses of Parliament, nor have I climbed the Monument, I still haven't had tea or anything else at the Ritz (though frankly I've had pretty much every other tea in London and suspect that I have not missed a huge amount), I haven't ridden in Hyde Park, I haven't used a Boris bike (yes I know). There is an endless list of haven't, which is part of the reason London is never boring- but this year I intend to get on top of the things I haven't done and stop doing the same things, much as I love them ;-)

(As an aside don't get me started on the non London things I haven't done! Cheltenham festival, Goodwood (horses and cars versions), Hay on Wye, all of the Highlands (and islands)... so much to do... I might just have a little rest first.
Posted by Rose at 10:46 3 comments:

Nigella Lawson is one of my icons. She has made a great career, doing what she is good at and what she loves, do I both admire and rather envy her, in the best possible way.

Nigella is no fairweather or tv only cook, she's extremely knowledgeable, her recipes are easy to follow and work. I enjoy her writing style and what's more I enjoy her outlook on life- she doesn't take things too seriously, she appears to be a great Mother and handled public grief with enormous grace, not that her personal life is any of our business. Yes she probably had a good start in life in many ways, but so did lots of people who don't do anything meaningful with that start.

In my eyes she is going through a particularly fabulous phase- Nigellissima is a great book  for cooking, which might sound silly but lots of cook books are more lifestyle and less cooking. That's not to say I wouldn't enjoy curling up and reading this, I have done so and thoroughly enjoyed it.

She also has some kind of new show in America, which we don't get, though maybe we will? 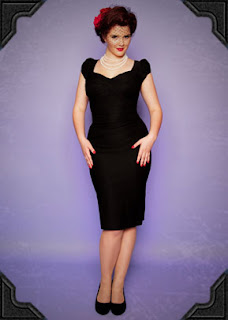 Anyway the whole point of this post is the billion dollar baby dress.

This seems to be the world's most flattering dress and to be not too cripplingly expensive, compared to say a Roland Mouret number (not that those aren't worth every penny I'm sure). Unfortunately the rest of the UK and north America seems to have noticed how flattering it is, but I still think I will get one and hope that it brings me some of Nigella's publishing success- and perhaps some man success also.

PS. I read the Nigella wears Coco Chanel perfume but I can't remember where I read that, so it's not exactly solid information!