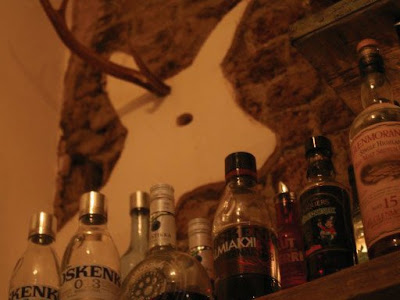 I have written about my love of Scandinavian food before and so when a friend and I happened upon Fika a Swedish Bar and Grill at the top (or Shoreditch) end of Brick Lane we immediately decided we had to go there for a pre- Christmas meal.

Fika is a small wood cabin like oasis after the fabulous but frenetic world of Shoreditch on a Sunday outside. By Summer I understand you can eat Crayfish on the terrace but in the harsh cold of December we stayed downstairs in the warm.

The Menu here is compact and I would have like to try everything (with the exception of the herring, I am yet to have herring I could love in Sweden or the Uk I'm afraid). I had reindeer sausages with mash- which is made with the potato skins on which is healthy and gives more texture- which comes with lingonberry jam and was delicious. My friends had traditional meatballs which I'm told were very good and very authentic (we had a Swede with us). I wanted one of the pieces of fish or meat on a board with delicious looking potatoes but it was only lunch time. So they will have to wait for next time- and there will be a next time as I loved it here and it was good value too.
Posted by Rose at 10:47 8 comments: 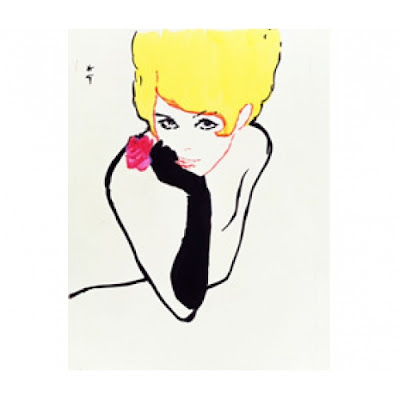 The last few months of 2010 seemed to be about chasing time and never quite catching it- and so far 2011 has been about being calmer.

I have been trying to get back in touch with all kinds of culture- and this weekend I finally managed to get to the Dior Illustrated: René Gruau and the Line of Beauty exhibition at Somerset House, on its final day.

I know it isn't terribly helpful posting about something you can no longer see but of course you can see Gruau's drawing all over the internet.

There is a Gruau website which also has a link to the Gruau collection from where whom can buy prints of his work for Dior- my favourites are for Miss Dior above and Eau Savage below. 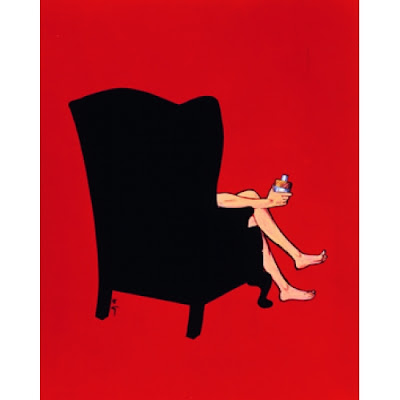 I think Gruau's work is charming but it must have also been a bit daring at the time- and the men's drawings especially do retain a certain edge.

It was a shame not to be able to buy a catalogue for this exhibition- so often you feel swamped by the inevitable merchandise at the end of touring a gallery but in this case I would have liked to find more.

As we walked around Dior Illustrated I found myself wishing illustration was used a little more in perfume and beauty (and perhaps all) advertising these days- photographs are what we are used to seeing but these pictures are in many ways more capable of inviting in dreams and more interesting to see- especially in magazines filled with pictures of faces that often look the same.

I wonder if Gruau knew his work might start to be collected? He was illustrating commercial work long before Andy Warhol or before the mainstream had really seen artistic value in advertising. The pictures on show were very fine, very detailed, pieces you would absolutely smile to see on your wall every day- as much as anything hanging over at the other end of the Somerset House Quad, where the permanent collection of more classical painting is held.
Posted by Rose at 18:25 9 comments:

I was lucky enough to see The King's Speech at the London Film Festival in the Autumn and have been telling everyone I know they have to see it since then. Now the film is about to go on general release so I'm going to say the same to you.

You have probably already gathered the King’s Speech is a film about the George VI’s stammer- and the Royal family more widely in the 1930s; the abdication crisis and the ‘gathering storm’ in Europe. The King's Speech is, clearly, a costume drama- but if you are the kind of person who normally avoids those please don't in this case- because to be honest the tailoring, clipped voices and period details are not what you are going to remember from this story- you are going to remember the two men it is about.

Really this film is a quiet but compelling story about a quiet but brave man, Bertie (or the Duke of York- or, later, King George VI) and his Speech Therapist. That therapist, Lionel Logue, is a stranger to the audience before the film- where Bertie, his wife and the other characters are people we feel we know very well- especially in the UK- even if we actually don't, or didn't.

To be able to speak, to communicate, is all- but that is easy to forget. Anyone who has ever had to do any public speaking knows the terror that can put in a person- in the pit of their stomach, on the sweaty surface of their hands, on their dry tongue. To have to make public addresses to enormous crowds who may assume your superiority when you cannot say whole sentences in front of your family without stammering- to have to do that and to turn up and try, well that is where the story of the King's Speech begins.

The film is about trying, about courage, about people from different backgrounds working together; about leaving your pre-conceived ideas at the door. More widely it's about Britain and the Commonwealth before the second world war, about emigrating to the UK then, about life changing course, about having to let some dreams go; it's not a twee film as you might imagine- in fact the stories told are extremely moving.

A word on the acting- which is sublime throughout, in fact so good you don't really notice it- everyone is pitch perfect.

I came away from the King's Speech with enormous admiration for King George VI the man (and the King)- and for Lionel Logue- whose fascinating story remained untold until now. Both were wonderful men for extraordinary times- if you are unsure just go and see this film, you will leave with a happy heart.

Poster image from Thefilmstage.com
Posted by Rose at 10:05 12 comments: