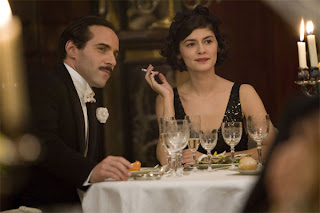 Sundays go with cinema like crumpets go with butter- Sundays are good without a trip to the cinema and cinemas are nice everyday of the week but the combination of the two is greater than the sum of their parts.

So on Sunday I had a date booked with Ben, Jerry and Coco Avant Chanel. Although as a female I obviously adore Chanel I wasn't totally looking forward to this. You know the feeling when you want something to be really wonderful and you aren't sure if it will be- and you'd almost rather not see it, try it or go there. Well that's what I felt about Coco Avant Chanel.

I had read reviews that didn't seem totally smitten with this view of the life of Gabrielle Chanel before she lived in the public eye. I don't agree with them. Audrey Tautou quite inhabits Coco and as the film goes on- and Coco finds herself more and more- Audrey is more and more Coco.

But it was the men in Coco's life I was as taken with as the clothes and the look of Chanel (although I was taken with those too, I long to run around Paris in those pyjama's in Mary Jane's!).

Benoît Poelvoorde has a vocabulary in little glances and nuances that would rival Stephen Fry's in words. I was quite smitten with him and wondered how an actor of this subtlety is not more widely known.

I was on his side and willing Coco to learn to love him- and then Alessandro Nivola appeared on the screen and I, like Coco, had my head well and truly turned. I have always been fond of Nivola, he is so perfectly handsome.

The film ends with you wanting more- more Coco, more fashion, more Paris and in my case a glimpse of some perfume. I wonder if they might make another film about Coco's later years? For this is affordable Chanel and made me take Chanel to my heart. What an amazing woman, truly an individual and the epitome of modern at any time.

Picture courtesy of www.filmofilia.com here
Posted by Rose at 10:01

Ah, you spent the weekend with Coco Chanel and I was with Julia Child!

I so look forward to this movie...it's not out yet here! And you must see Julie and Julia! It will make you want to cook. A lot.

I can't wait to see this Rose...it sounds like the perfect Sunday to me, xv.

Hi Vicki- it was very nice thanks ;-)

I can't wait till this comes out in America! Love love love Audrey Tautou...

Cassandra- hello! but it will be wonderful on the small screen with something bubbly. The costumes get better and better, they are an important part of the film showing how she changes. I sat in the cinema in total bliss actually, I'm not sure my friend was so enamoured but I am someone who is always happy in the cinema, even when seeing something not great!

Daily- I didn't realise it wasn't out there until Pamela's comment- but you have Julia and Julia which I am obsessed with seeing! Yes Audrey is wonderful- she seems so comfortable in her own skin- like Coco herself.

This sounds a lovely film to indulge in - style and elegance and clothes and Paris! Don't think it is one for my feller, but definitely one for me!

Hi Jayne- no not really one for the boys! I think the cinema was entirely full of girls like my friend and I indulging or husbands/ boyfriends who looked like they'd been dragged.