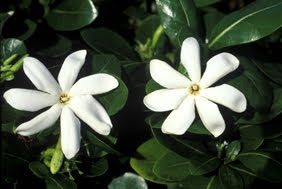 Tahiti is my idea of what paradise on earth must really be like. The image I had of it for a long time- that we probably all first have in our minds when people mention a trip there- is of those little huts on stilts out in Aquamarine sea.

Inshore though the Tahiti I read about is lush with vegetation and tropical flowers; the Queen of the Tahitian flowers being the Tiare which I think is utterly charming and one of a select group that I can only describe as happy flowers. By that I mean flowers that not only bring a smile to your face (most flowers do that for me) but in which you can almost see the sunshine that has made them grow- the Tiare is the much more exotic and rarefied cousin of the sunflower and the daisy in this respect.

The new fragrance from the London based perfume house Ormonde Jayne is called Tiare. 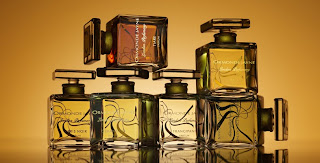 The fragrance is based around this delicate, enchanting flower and the precious oil made from it is at the heart of the scent. The full list of notes is:

This is a transporting fragrance but not in the traditional far- away island sense of suntan lotion and pina coladas- it is much more subtle and certainly more refined. The middle notes sing- there is the richness of high quality jasmine and the sensuality of ylang but there is also a green but slightly creamy quality to this scent which can only be the precious Tiare.

You can smell good quality in a scent the way you can see it in a tailored suit, or hear it in the clipped noise fine shoes make on pavements. Tiare, like all the Ormonde Jayne scents, is made up of very fine oils that speak for themselves- and as the scent dries down to it's base it becomes more and more interesting, it speaks more softly but that in no way means it has anything less interesting to say.

I have only had my sample for a day so I’m sure my thoughts about it will develop but at the moment I can’t stop thinking this shares something in character with the bottled delight that is Diorissimo. That is in not because I think they smell especially similar but they have a similar character. You might look at two women who outwardly were not at all alike but there sense of humour and ideas might be very aligned- well I find these two scents aligned in some ways. They are joyful to wear, at once very simply beautiful celebrations of two enchanting flowers(the Lily and the Tiare) and at the same time very complex amalgamations of oils that sing together like a choir.

I would wear this scent at any time of the year- in fact the two times I think it would smell best to me would be on a crisp cold London night when I was buttoned up in a coat and in a cocktail dress on holiday. Perhaps one day I will get to Tahiti and if I do I will be taking some Tiare perfume with me there. Until then I have my little vial and my dreams.

Tiare is available from Ormonde Jayne's website here and from their boutiques in London (on Bond Street's Royal Arcade) or Jumeriah Beach in Dubai.


Rose was the lucky recipient of a sample from Ormonde Jayne
Posted by Rose at 23:38

I could have 'listened' to that on and on. You should either become a professional scent reviewer - if that's not what you are already doing anyway - or an ambassador for Tahiti.

Hi MM- well that's such a lovely thing to say. I'm not a professional scent reviewer but I do love combining my passion for words and fragrances. Oh Tahiti- I'm waiting for their call!

Sounds amazing... You know I've never tried a scent by Ormonde Jayne! I can't believe it. I'm coming to London for Xmas so I will search this one out! Thanks! xo

Hi Daily- I really think you should search it out when you are here. It's on one of the beautiful arcades off Bond Street which looks extremely Christmasy and classy so it would be a nice walk up there and look around as part of your trip.

The staff are very helpful and the scents are very high quality. Maybe you will find a Christmas present for yourself! If not it's a fun afternoon.

Hi Trish, Thank- you that's really kind- especially as I like your perfume writing very much. I hope you get to smell it soon too. Rx