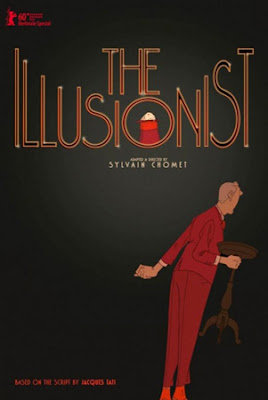 I have been desperate to see L'Illusionniste for weeks now and finally managed to catch it this weekend.

The Illusionist is the latest film by Sylvain Chomet who also created Belleville Rendez-Vous.

I don't wish to spoil the story so read on with caution if you prefer to see a film without any background.

The film is based on a 1956 Jacques Tati script about a magician from Paris who finds demand for his act is steadily decreasing as the world of entertainment changes. The illusionist, who is said to be Tati himself, is a charming but melancholy character, always well turned out and full of kindness but not quite succeeding in life.

The illusionists story could be a metaphor for hand drawn animation- which finds itself under constant threat from new methods and technology. This film is a potent reminder of just how powerful, touching and realistic hand drawn animation can be. There are actually very few moments of dialogue in the film but you don't need them because you can understand the story completely from the characters movement and expressions (and the lovely score). I am sure it is extremely expensive and time consuming to make a film this way but for me when it is this beautiful it is worth doing.

The film is set mainly in the Scottish highlands and Edinburgh but also features Paris, London and a train journey from England to Scotland. There is great humour and detail in the backgrounds and I get great pleasure from seeing a black taxi or Jenner's the department store in an animation although I can't really say why, everything just looks more magical in the hands of these animators.

There is website for the film where you can watch the trailer and see some of the stunning images. Please visit the Illusionist here if you would like to find out more. The film is on general release in cinemas but seems to be dissappearing fast.
Posted by Rose at 13:26

I loved everything about this film and wished I could have sat through it again to catch all the wonderful detail. (Whatever happened to continuous performances!) It was sheer delight from start to finish ... especially the London/Edinburgh settings, and the train journeys and the ferry to the Isles.

How inspiring.....I to have been trying to catch this one, I shall redouble my efforts!!

Hi Mary- I know me also, I loved all the witty details- especially the rabbit!

Hi Young at Heart- really do if you can- it's charming

The magic you have been talking about - I think it was one of the reasons I was so keen to be an illustrator. Unfortunately, I never managed to draw magically :)

I think I am in love with just the poster, and that is before knowing anything about the film. I just watched the trailer - oh wow, this looks fantastic, and just the sort of thing I like. Lovely London, and the man's kilt ruffling on the boat - thank you so much for pointing this out. I wonder if I can still see it anywhere!

have fashioned you if you fancy having a go.....