First thoughts on Fitzrovia by Penhaligon's 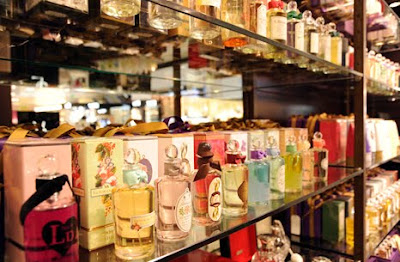 Last week I received an unusual but delightful invitation to attend an evening with Penhaligon's at Callooh Calley in Shoreditch (which if you haven't been is a cocktail and Alice in Wonderland lovers destination bar).

With my special key (which was the unusual part) I was able to walk through the wardrobe and into the Penhaligon's room where we were treated to drinks inspired by their fragrances; I think the hit of the evening was the Blenheim Bouquet but they were all very worth trying! 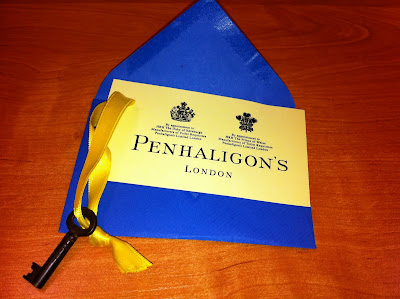 We were able to try three upcoming Penhaligon's scents; two further additions to their Anthology collection- which is made up of scents from their archives re-imagined or refreshed for modern noses- of which more news soon.

Of course all new perfumes are exciting to me but I had been waiting to try Penhaligon's major new scent for the year since I first heard that it was to be inspired by gin and so I wanted to write some first thoughts about it now.

Firstly because I love gin (although I do not love tonic at all) and think juniper is a wonderful and very British ingredient. Secondly I'm obviously very interested in the relationship between food and scent and a new gourmand that doesn't begin with sugar or chocolate is only a good thing in my eyes.

On first sniff I can report Fitzrovia is indeed gourmand and there isn't just juniper but pepper, black cherry and brown sugar in the notes. The scent will be unisex which is obviously very trendy at the moment but in this case I think is correct. I will write far more about the fragrance when it is available(in the Summer) but until then I think I will be getting more interested in smelling different varieties of gin to keep me occupied.
Posted by Rose at 09:24

What a fun evening! I love the key. Fitzrovia sounds like such an interesting scent - I shall have to look out for it in the summer.

I may have possibly "borrowed" some Blenheim Bouquet from a London hotel I stayed in recently (my thinking was it was a small enough bottle to be complimentary/steal-able). What with all your expertise I am very glad to hear it was a favourite of yours too...

How very Alice in Wonderlandy the event sounds! And what a great name for the scent - Fitzrovia the area is a bit trendy too, isn't it? Me, I am a sucker for gin - and tonic! - so must give this is a sniff when I am next down in London.

Hi Bird- ha ha! I think hotels must expect that ;-)

Lady Jane- it's a nice one isn't it

Hi Vanessa- it's not out until the Summer so you have time! and yes Fitzrovia is both associated with the Bloomsbury set and bright young things and in modern London regeneration north of the centre I guess- it's a well chosen name I think

I came across your article on Google about scents and was wondering if you or your readers had heard of Scentsy Wickless Candles? It is a direct sales company that just opened in the UK and Germany today April 18th. There are tons of different smells. There isn't smellavision but you can take a look at www.GoodbyeWick.com. I love your blog and love your personality in the posts I've read thus far.

I was over in London last week and before I went to the Watteau Exhibition at the RA I dropped into the Penhanligon shop in Burlington Arcade and had a half hour of fun trying to find a new scent. The saleswoman was very knowledgeable as well as being very nice, and in the end I settled on one I had never heard of which was called Cornubia. Next time over I shall try Fitzrovia (seeing as I lived/worked there for years!). I love your blog!