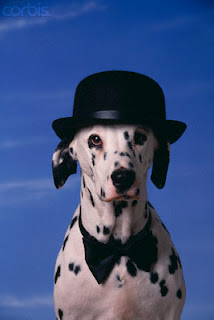 On my journey to work I see a man who takes his dog into work everyday.

I always wonder what the commute from it's rural or suburban home to the ever cold hall at Waterloo and through the legs of throngs of smelly, grumpy, rushing people must be like for a dog.

The commuting dog looks a bit like an Irish Wolfhound but is shorter and stouter in stature. He has bushy eyebrows, very knowing, kind eyes and the constantly smiling mouth some dogs have.

He is incredibly calm, much calmer than his owner or the other passengers. He trots along the platform with neither too much nor too little haste.

I often whereabouts the dog spends his days. My best guess from his owners clothes is that they head into the city and he sits under a desk patiently with his chin in his paws while his man does deals.

Other things I often wonder are:
Do dogs need a ticket and is there a limit to how many dogs there can be per carraige?

Does commuter dog take a copy of the Metro in the morning?

Does it annoy commuter dog as much as it annoys me when the guard insists on checking tickets, even though it means walking over and through a packed carriage full of people who have already been through electronic barriers?
Posted by Rose at 11:37