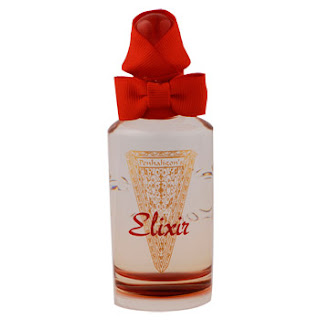 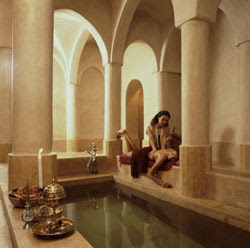 I discovered Penhaligon's Elixir on a wander up the Burlington Arcade killing time before meeting friends to see the Nutcracker. My mind was awash with Christmas, how had I spent so much again, would people like their presents, what time would I be able to leave work on Christmas Eve, why wasn't I feeling quite as festive as usual this year. I bought myself my ultimate food treat, a small but perfectly formed box of Laduree orange blossom and rosewater macaroons. The intention was to have one and save the rest for boxing day (really reader, did I think this would ever happen?).

I wandered from Laduree at the Piccadily end of the Arcade upwards, munching on the delictable treats that showed us Nora in A Doll's House was not a doll at all but a living woman who could be tempted like Eve was tempted by the apple.

I gazed like a, slightly better dressed, Dicken's pauper character into the windows of jewellery (these shops are definitely the kind where you ring the bell to go in and I didn't want to go in, I wanted to just take in all the glory in my own time). The Art Deco jewels particularly always nearly make me gasp they are so beautiful. Whenever I look at jewellery I do say to myself why, oh why, am I so taken in? They are just rocks, bits of carbon set in bits of metal- why am I so fatally attracted to these glittering gems? But I am. They are like the macaroons, I can't resist and if I had the money I fear one bite, one ring and I would be doomed to necklaces, bracelets and brooches.

So it was, my head now filled with the extreme decadence of too much fine French sugar and looking at too much jewellery, I continued up the arcade. All the London arcades are a little like libraries I find. People speak quietly, in the hushed but rich tones of the wealthy, or those who have had a good lunch with wine and (dare I say it) the odd now seemingly rather naughty cigarette or cigar. They have wonderful acoustics so the whispers and the footsteps of the elegant shoes reverberate around. You can hear the roar of the city outside but it sounds much further away than it is- none of the dirt or commotion can touch you inside these little cloisters of luxury.

I arrived at Penhaligon’s, a favourite shop of mine because many people I am fond of use their wares. I didn’t need anything at all having already done a large internet order from them and my credit card most certainly didn’t need to go in. But the sugar and those little bottles with their perfect bows pulled me feet in where my brain was telling them not to go.

I wandered up to the little ‘tasting’ table they always have and reached for familiar favourites Bluebell and Violetta, they were lovely as ever. Then I saw the crimson red of the new Elixir bow. I have always like Hammam, Penhaligon’s first scent, a men’s rose cent- and had read that this was the inspiration for Elixir. I was intrigued but in light of recent Penhaligon’s releases and the notes I didn’t expect to be bowled over, my inclination was why mess with the lovely original?

How I was wrong. This scent is wonderful on me and quite unlike the other Penhaligon’s scents that are aimed at either a female or unisex customer (I think Penhaligon’s men’s scents have always been their most interesting and that they are where they excel really).

Elixir is much more daring than I ever thought a Penhaligon’s scent for a woman could be. I am not sure if it was all the sweetness of the Christmas scents around town and the macaroons but the jolt of dry, church incense was just what I needed and had me immediately. I have to say on my skin I don’t get the strong eucalyptus note the ingredients lead me to expect but frankincense in a cold, very old church sense- no a Cathedral with ancient crypts and secret tunnels. This is not musty or antique though, it is fresh and dry, like the air when it’s snowed.

I wandered down the next half of the arcade in quite a different mood; contemplative but happy, quite content to have found such a lovely fragrance so unexpectedly. Also actually feeling quite peaceful in the thought that, although I do love Christmas very much, we would soon leave it behind for simpler less excessive days and that those days were as good in their way.

A final note. I imagine that Elixir has a great deal of layering potential when worn by either a man or a woman and one of my New Year scent resolutions is to investigate that potential further.


Hammam picture from: http://www.morocco-travel.com/morocco/PublicHammam/PublicHammam-Hammam-1.jpg
Posted by Rose at 13:47

Oh! You've made me even more excited...I am going to be part of an Elixir split, and have already been eagerly awaiting my small amount.

Thanks for sharing your day...

Hi Scentscelf, I don't think you will be dissapointed! I will look forward to hearing how you find it.

Oh you're welcome, thank you for reading about my day!

I can't wait to get back to London and have a dawdle up that arcade, munch on a macaroon (caramel for me) and cover myself in Elixir. Thank you Rose, xv.

Hi Vicki, that sounds like a lovely welcome back to London wander. Mmm love the caramel too (who am I kidding I love them all!) Happy New Year!

It is beautiful , not as full-on as many of the incense perfumes.

H Angela, thank you for stopping by the blog.
I agree, it's a very wearable incense but that's no to say it's not without a certain edge. I think it's a great addition to their line, a bit more daring for them.