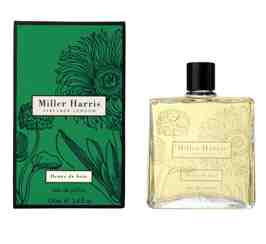 Strolling through my beloved Liberty I found to my surprise and happiness the new Miller Harris fragrance Fleurs De Bois available a month earlier than I had thought it would be. It is I now find exclusive to Liberty for the month of April.

The Liberty website describes the scents as having: 'Crisp top notes of galbanum and green grass, lemon Sicily, tangerine green and rosemary [that] give way to a traditional English bouquet of rose, jasmine and iris. A base of oakmoss, patchouli, santal, vetiver and accents of birch complete this green and woody bouquet'.

Initially I found the grass and rosemary scents most pronounced and as the scent dried on my skin the rosemary continued to be very detectable together with the lemon and some grass- but all in a more mellow, woody base softened by a hint of florals as is described.

Fleurs De Bois has excellent staying power, is beautifully packaged (as all the Miller Harris scents are) and I find it a very interesting perfume. It is not something I fell instantly for but the more I sample it the more I think I could fall for it.

My one point of contention with Fleurs De Bois is it's name. I don't find it unusual enough and it most definitely doesn't sound like what it smells of. I know the company has a tradition of using french names but I'm sure something relating to a secret garden in French, or even to the park, would have been much more romantic and appealing.
Posted by Rose at 21:48

I shall have to have a try when I go back to London - any excuse for a wander through Liberty! Happy Easter Rose, xv.

The box looks gorgeous. I love their boxes and bottles. Trying to wrap my brain around a rosemary perfume, don't think I've ever worn one. I just might want to pour some salt on my self and me if I did, LOL.

Vicki- yes you must try, I am very interested in what other people think. To start with I really wasn't sure and it grew on me. I still think the best Miller Harris is Fleur De Sal though

Hi Trish, yes I agree the bottles/ packaging and all the artwork at Miller Harris are beautiful. The colours are very modern and striking but the drawings are very whimsical.

It isn't just rosemary but it is quite noticeable- or was to me. I know what you mean, it is unusal- but I think it's quite interesting. A friend had rosemary in her wedding bouquet which I thought was lovely- because it made a change from the normal floral smell of bouquets.

Uff da! There's only one note there I could possibly take issue with -- the patchouli -- but green (grass, galbanum, oakmoss, even the rosemary) with birch tar? lemon Sicily? some rose & jasmine??

Even if it's a slow courtship, as yours is with it, I can easily imagine myself falling in love. I'll need to find a sample so I can go a few rounds on the dance floor and see what I think...

Hi Scentscelf- I think it should be everywhere from May and I would definitely advise a few turns around the dance floor! I will look forward to hearing what you think