Paperbacks and postcards- An Education 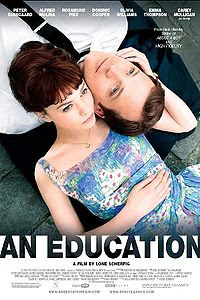 An Education is a British film in every sense. Set in the early sixties with a screenplay by Nicky Hornby based on a memoir by the journalist and writer Lynn Barber. It is a dramatic film but with a lightness of touch. I had been anticipating it’s release ever since I saw some stills of the cast in costume but confess I thought it might be a triumph of style over substance initially- I was happily surprised.

Lynn Barber’s character, here called Jenny and played by Carey Mulligan, attends a private girl’s school in Twickenham. Somewhere that now feels more like London than the suburbs but back in the early sixties, in a Britain that was closer to the second world war version than the free love one we think of, Twickenham must have felt as far from London as the moon.

The film raises lots of issues. I suppose one of those is just how long the war had an effect on everyday lives; Jenny’s parents live in it’s shadow and perhaps as a consequence live somewhat vicariously through their only, beloved daughter.

For me, as the first in my family to attend University despite not being the brightest, most intelligent person in my family by some way, it reminded me just how recently it is that anyone, especially any female, could think of going to University whether for financial or other reasons- and really what a privilege it is.

I enjoyed all of the performances. Carey Mulligan is rightly being highly praised- perhaps it’s the benefit of being mostly unknown, although I don’t think so, she really ‘is’ Jenny- and she makes her likeable despite effectively being a very self- absorbed teenage girl. However this is an excellent ensemble cast with Alfred Molina and Emma Thompson being particularly pitch perfect in their roles, Thompson is suitably terrifying without being one dimensional and Molina is heartbreaking at times. I must say too that Rosamund Pike not only gets the pick of the beautiful costumes but she is very funny!

I wouldn’t wish to give anything away but there is an exchange between Jenny and her English teacher- played, again very sweetly and deftly, by Olivia Williams- later in the film which has stayed with me. Jenny remarks on how lovely her teacher’s things are and I suppose she is seeing her teacher as a person for the first time- and seeing how similar their tastes are. Jenny’s teacher replies that all her books and pictures are ‘postcards and paperbacks’ with a sigh and Jenny replies ‘that’s all you need’. Really it’s true paperbacks and postcards- and blogs and certainly tickets to the cinema- especially to see absorbing films like this- can feed your soul as much as beautifully presented hard backed volumes or oil paintings on your wall.

Picture from Wikipedia here.
Posted by Rose at 08:57

Ooh, thanks for the review, I was thinking of seeing this but not sure. Now I shall try and find the time!

I've heard such good things about this film... I can't wait to see it! Thanks for the review...

I am waiting for this movie!

Lovely review, Rose! It sounds the sort of film I'd like but somehow never quite get around to seeing. One day I shall gather all manner of these films together and have a pure 'Indulge Me!' day.

I just saw this film today Rose- thank you for the recommendation- I LOVED it! Just wrote a pseudo review and referenced you on my blog...

Hi Marie- I know what you mean actually, sometimes when something is everywhere it's a bit off putting. I loved it- more so because I wasn't totally sure- although Emma Thompson is a very good gage. She is rarely in anything bad!

Daily- I'm glad you too the recommendation and loved the film, it's good on lots of levels isn't it.

Pamela- I hope you get it soon!

Hi Jayne- oh the films and books I have queued- the list goes on. I often have a me day around Christmas- perhaps boxing day, where I lock myself up and watch 2 or 3 films in a row. It's *bliss*.

I too will search it out...
So true about the comment, "that's all you need"
You never know where food for the soul can come from - the form is not so important.

Hi Paris breakfasts- thanks for visiting- that's very well put- the form is not important- as with people really- although the form can be very beguiling with those too!