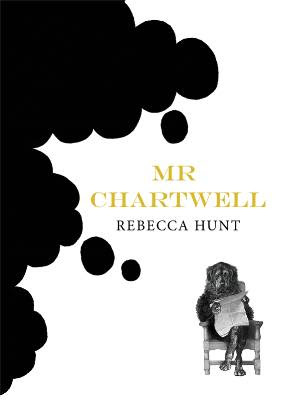 Mr Chartwell by Rebecca Hunt is a book I expect you will be hearing a great deal about in the coming months.

I am lucky enough to have read the book before it is released as a result of attending a talk with the author at Foyle's on Charing Cross Road.

The reason you will hear so much about this book, aside from it being a thoroughly engaging debut, is that it's title character, Mr. Chartwell, is a speaking dog. A speaking black dog.

This canine isn't the friend of children's tales you might be thinking of at all though, he is something else. Chartwell, or Black Pat as he later prefers to be known, is such a clever idea, for he is what Winston Churchwell famously referred to as his 'black dog'; Mr Chartwell is depression. This anthropomorphism is such an engaging way of writing about the malady, the strange mixture of darkness, stress and apathy that depression seems to be that it is worth reading for the idea alone.

Happily though the narrative is strong enough to warrant attention for more than this speaking dog. I enjoyed the characterisation of Churchill very much, he is a man whose life we know so much about- and whose inner life we think we understand- but who remains something of an enigmatic mystery despite all that. Hunt's characterisation of this twentieth century giant is detailed, warm and touching without straying into any saccharine sentimentally.

Just as interesting a portrait is drawn of Esther; the other main protagonist of Hunt's story. Esther is a presumably entirely fictional character. She is intelligent and holds an interesting job. She is modern woman but a lady who is resolutely refusing to enjoy living in the early 1960s when the book is set- instead living in a kind of limbo after a bereavement while the seeds of cultural revolution are sprouting around her. She is a very real character because of course most people in the early 1960s, or at any time when great changes are happening, are not part of that change- they take time to process what is happening- or their life gets in the way of seeing what is occurring and what that means for them.

Then there is Black Pat himself. Apart from being a very clever idea Black Pat is perhaps the most fascinating character of all- and that is nothing to do with him being a large, rather unkempt talking dog as we have encountered speaking animals before. He is written in such a way that you constantly want him to be in the scene, you constantly want to know more- were he a man he would actually be just as intriguing and hypnotic. He has his own purpose in life- and is surprisingly perhaps not an unsympathetic personality.

When she spoke about how she came to write Hunt explained that she hadn't spent excessive time learning her craft as such, she had just got on and written. She wrote short stories and is an artist so obviously understands translating creative ideas into lasting pieces. There is something particularly fresh about this novel and I am sure that is a combination of her raw talent, her artistic nature, the obvious care her agents and publisher have taken to nurture her book and more- but I think it is also that clear desire she seemed to have to get on and write her story.

I enjoyed that story very much on many levels. I learnt something more about depression and struggling, about other people's internal lives, about how busy and consuming all our internal worlds can be and the struggle we can have to live our external ones too; I laughed, felt great affection for all the characters and wished I could visit post war Britain.

There is an interesting interview with the author Rebecca Hunt here.

Mr Chartwell is published by Penguin in hardback tomorrow, the 7th of October 2010.

Book cover image from Penguin books.
Posted by Rose at 10:10

Hi Mystica, this is the author's first book and it's a really interesting debut.

Mr Chartwell is absolutely facinating in subject matter, description,etc. Have not read it, just heard it on BBC radio 4 Book at Bedtime. Best one I've heard in years. The reader, Miriam Margolies did a wonderful job. Such a range of voices.
I wonder how it will compare with just reading it?

Hi Pamela- you'd love it I think, it's really well written- the author is an artist and I think it really shows in her style, she comes at things from a slightly different angle- in a good way.

Hi Michael- I didn't get to hear this on book at bedtime- although I am a radio 4 addict I tend to listen to podcasts on the bus/ tube. I can imagine it would make a particularly good audio book though because it's a very intimate book in terms of the characters feelings and mind set and that would work well. Miriam Margolies is such a good choice! although how does she do Churchill?!